I’ve been programming something or the other in Javascript for more than a year now, but I still did not have a clear understanding of what it really is, and how it works. What makes it so different than other languages, why browsers use it, etc.

But now, after some digging into how stuff works, I think I understand what it is. I had heard of Chrome’s runtime V8, but I did not know what it really is. I had used callbacks, but did not know how they work. So this post tries to clarify the small misconceptions and incomplete information about these things.

As Wikipedia puts it, Javascript is a high-level, dynamic, untyped, and interpreted programming language. But this statement doesn’t do much. We need to explore more. Javascript is popularly known to be a single-threaded non-blocking asynchronous concurrent language with a call stack, event loop, a callback queue and some APIs. But V8 only has a call stack and a heap. Weird! What about the other stuff? The event loop, the callback queue and the APIs? And how can it be single-threaded as well as concurrent simultaneously? There’s something we are missing here.

As it turns out, the Javascript runtimes (like V8) only have a heap for memory allocation, and a stack for contextual execution. The other things are the Web APIs in the browser, for instance the setTimeout, AJAX, DOM etc. So in a browser, Javascript has the following structure: 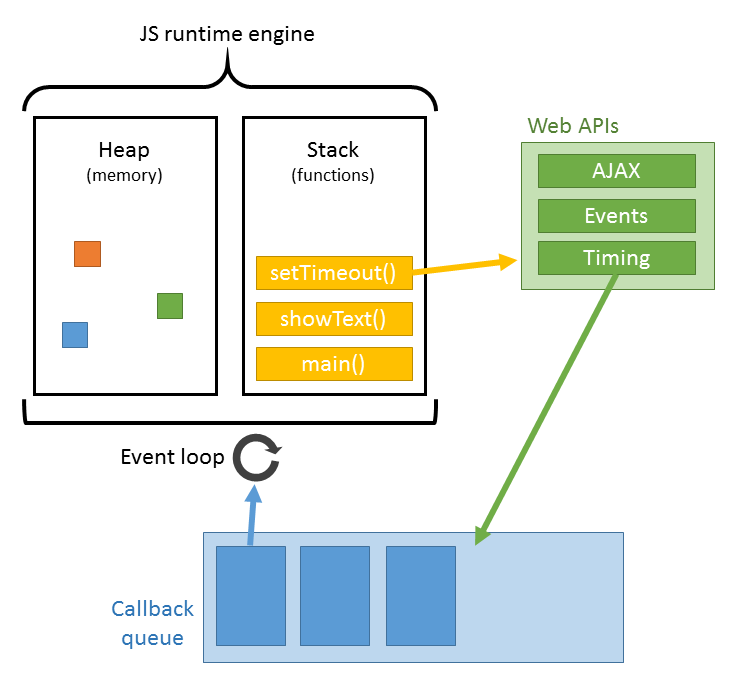 The example image above is the representation of Chrome’s Javascript environment. Notice that V8 Runtime (the big rectangular box) only has a call stack and a heap for memory allocation. The Web APIs, event loop and the callback queue are provided as external tools by the browser, and are not inherent to the V8 runtime. We’ll try to look at each of the parts and understand how this works.

What is the call stack?

So let’s start with the call stack. What is this? Well, as we already know by now, Javascript is single-threaded, which means it has a single call stack, which in turn means that it can do one thing at a time. This is the same as in an operating system, each process has the call stack, and each time a function is called it gets a new stack frame. Why a stack is used you ask? Because the call stack is fundamentally a data structure which keeps a record of where in the program is the execution going on. When the execution steps into a function, it is pushed on to the stack, and when a function returns after completion, it is popped off the stack, so we have to get back to the place from where this function call was made. Thus naturally, a stack data structure makes complete sense. Anyway, getting back to Javascript, it’s the same thing, and whenever the program throws some error, we can see the call stack in the browser console.

So what is ‘blocking’?

Ever heard statements like nodejs uses an event-driven I/O bound non-blocking model that makes it perfect for data-intensive, real-time applications? Those terms are not very helpful yet. Let’s try to understand each term there.

So JS in the browser is a problem if it is blocking, isn’t it? Because say we make a network request, then we cannot click on things, submit forms, etc. because the browser is blocked now. But this does not happen! Why? Because we have asynchronous callbacks which solve this problem.

Is Concurrency a sham then?

Notice the arrows in the above image. The call stack can put things in the Web APIs, which push the callbacks into the callback queue once complete, and then comes the event loop magic. The event loop does the following:

The event loop keeps looking at the call stack and the callback queue, and does this simple job when it meets the condition above. There exists a tool where we can visualize this clearly. Loupe helps visualize the whole process beautifully. Go put some code there and see what’s happening. For example, we take the code below (on Loupe).

Though the visualization makes it clear, let’s go through what’s happening:

Try this to understand the above statement:

As expected, cback() never makes it to the call stack because of blockage() and thus setTimeout fails to give us the desired thing after 3 seconds. The browser has to render the UI every 16.67 milliseconds (60 frames per second), and if there is blockage in the stack, it will not be able to render. So blocking the event loop actually means having some function on the stack that does not return well in time.

This code on loupe gives the example of a more complex program, with an event handler defined for a button. The $.on('button', 'click', ...) Web API keeps waiting for events (clicks on the button) (an example showing the event-driven nature), and pushes the said function in the callback queue when we click the button below. The event loop takes care of things thereafter.

This helped me clarify and satisfy some fundamental questions about Javascript and know how it actually works. Do watch Philip Roberts’ talk on event loops here.