The complexity class of #P problems

Recently, I had an assignment in one of my courses - Beyond NP-Completeness, to present the complexity class of #P (Sharp-P) problems based on L.G. Valiant’s paper on complexity of computing the permanent of a matrix.

This post is an attempt to explain the paper as I found very limited number of resources on the internet where this topic is discussed in detail, one of the sightings being a lecture by Professor Erik Demaine under MIT open courseware which can be found on youtube.

Before we begin, it is strongly recommended to familiarize yourself with the following:

So let’s begin with the permanent, which is defined for an n x n matrix A as:

A closer look at the permanent tells us that if we change all the negative signs in the expression of the determinant of a matrix to positive signs, it will indeed become the Permanent. To show this with an example: Consider the matrix,

Valiant comments on the complexity of the problem of finding the permanent of a (0-1) matrix, for which he defines the class #P. To put it easily, #P problems are the counting problems associated with the decision problems in class NP. It is a class of function problems, and not decision problems (where the answer is a simple yes/no). An NP problem of the form “Does there exist a solution that satisfies X?” usually corresponds to the #P problem “How many solutions exist which satisfy X?”. Here goes the example of a #P problem: #SAT - Given a boolean formula \(\phi(x_1, x_2, ... x_n)\), find the number of assignments that satisfy \(\phi\). This is the counting version of the famous SAT problem which is known to be NP-complete.

Back to the problem

Now if we look at the term inside the summation, that is \(\prod{A_{i, \sigma(i)}}\) for \(i = \{1, 2, ... n\}\), we can try to imagine the value of this term as synonymous to a possible perfect matching in the bipartite graph represented by A. Why? Because we know that this term takes one element from each row and each column, so all vertices are covered in the term, and this term = 0, if any of the elements picked are 0. But in our adjacency matrix, 0 for row i and column j means that there is no edge between \(x_i\) and \(y_j\), so this term evaluates to 1 if and only if the selected elements form an edge cover (a perfect matching) for the given bipartite graph. So clearly, the whole term \({\rm Perm}\ A = \sum\prod A_{i, \sigma(i)}\) where the summation is over all \(\sigma\) represents the total number of perfect matchings in the bipartite graph represented by A. As finding the number of perfect matchings in a bipartite graph \(\in\) #P, therefore clearly, finding the permanent of a binary matrix \(\in\) #P.

Now we shall move on to prove the Valiant’s theorem which says that finding permanent for a binary matrix is #P-complete. We already proved it is in #P, so now all remains for us is to prove that it is in #P-Hard, that is all #P problems can be reduced to this problem in the way explained earlier in this post (where completeness is defined for #P problems). For this, we look at the problem of finding the permanent as a different graph problem.

Consider A = adjacency matrix of a weighted and directed graph with n nodes (We are talking about a general matrix now, not a binary matrix). We define two things now:

Now, with a good observation, we can conclude that \({\rm Perm}(A) = \sum W_{i}\) where \(W_i\) is the weight of the \(i^{th}\) cycle cover. We sum the weights of all possible cycle covers of the graph and it turns out to be equal to the permanent of the adjacency matrix. If this is hard to visualize, feel free to work out on an example having 3 or 4 nodes to let that sink in.

We construct graph G by superposing the following the structures:

For this example, the following are the structures:

The small shaded regions are the junctions, which are themselves a network of nodes and edges represented by the adjacency matrix,

Why this matrix is valued exactly with these numbers will be clear as we proceed. This is a very crucial part. Let’s note some important things:

Using these properties, we can draw very good insights. Let’s look at routes in the graph. A route is a cycle cover. If we consider all the routes which have the same set of edges outside of the junctions, then we can call a route bad if:

In any track \(T_k\) of any good route, there are two cases as seen in the structure of the track:

Now observe the interchanges. Each interchange has 5 junctions, 3 of which are connected to a corresponding track, which consists of the variable that is present in that particular clause, and 2 are internal junctions, which are of the same structure as a normal junction. A careful observation tells us that the whole of an interchange (all the five junctions) cannot be picked up by a route, in fact, all 3 of the external junctions can never be picked up in a route by the interchange, so at least one of the 3 junctions connected to tracks must be picked up by a track, this constraint being synonymous to the fact that we need at least one literal in the clause to be true, to make the whole clause true.

Now the total number of good routes (cycle covers) exactly corresponds to the total number of satisfying variable assignments for the boolean formula \(F\) of the SAT instance we had taken. Since #SAT is known to be #P-complete, the Permanent problem is now proved to be #P-Hard.

Let’s get on to finding the permanent of a 0-1 matrix now. It is a great thing to note that though the problem of finding a perfect matching in a bipartite graph \(\in\) P, yet counting the total number of perfect matchings \(\in\) #P-complete. This is one of those examples where it becomes clear that easy decision problems can have very hard counting versions of themselves. Rest of the post is about proving that 0-1 permanent is #P-complete.

To prove this, we will reduce the permanent problem to the 0-1 permanent problem. First, we need to make the weights of all the edges non-negative. Doing this is easy with modular arithmetic. We can compute \(permanent\ mod\ r\) for all \(r = \{2, 3, 5, 7, ... p\}\) where \(p \leq M^n n!\), as we do not need to consider primes greater than the largest value the expression of the permanent can take. Here \(M\) is the maximum value in the matrix, so a total of \(n!\) permutations of the entries with each of them being equal to the maximum value. That’s the maximum we will ever have.

The first method is mentioned in the paper, so I will be explaining the second perspective here. Images are taken from Wikipedia. First, we transform the graph \(G\) into one where all edge weights are powers of 2, the graph \(G^{'}\). To do this, we take an edge with weight \(w\) and split it into a widget as shown in the image below. We use the fact that any number can be expressed as a sum of powers of 2. 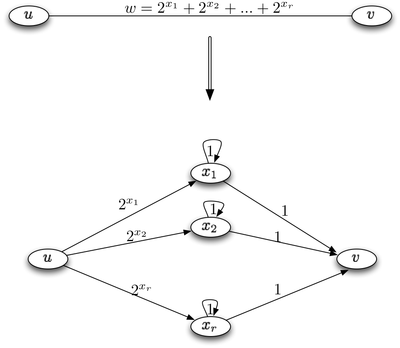 To prove the correspondence, take two cases for a cycle cover C of the graph \(G\):

Hence graphs \(G\) and \(G^{'}\) are equivalent in terms of the permanent problem. Now we are left with a transformation such that all edges become binary, with weights 0 or 1. This is easy in the following way (Refer to the image below). 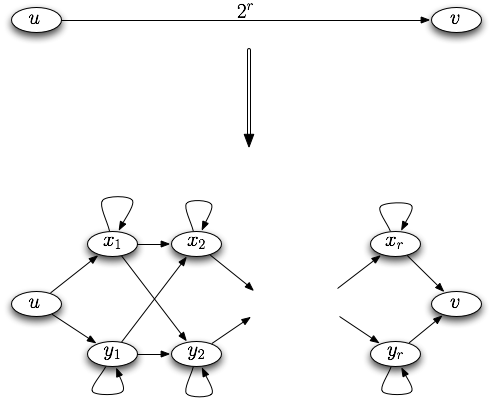 I have talked about more #P-complete problems and their proofs in this post.