For a recent project, I had to deal with the following subproblem.

Given an alphabet \(\Sigma\) and some property \(P\) (not relevant to this post), find the length of the largest string that exhibits \(P\) and also has the maximum number of distinct palindromes possible for a string of that size. It is known that there is a finite number of such strings.

Naturally, this calls for a simple backtracking solution where we start with the first letter in the alphabet and generate strings in lexicographic order. With each new string generated, if it satisfies \(P\) and has the maximum number of possible palindromes then we follow that search path in the tree; otherwise, we prune it. However, the strings we are dealing with could go up to millions of characters. So we need to do this as fast as possible. But first, let’s have some background.

The first thing to observe is that a string of length \(n\) will have at most \(n\) palindromes (excluding the empty string). To convince yourself, try to construct a string by adding one letter at a time, and each time look at how many new distinct palindromes this new letter creates (it will be at most one).

Such an algorithm is given by Rubinchik and Shur (paper link), where the primary idea is to construct a graph where each node represents a unique palindrome. This approach was first proposed by Mikhail Rubinchik at the Петрозаводск (Petrozavodsk) summer camp 2014.

There are two types of edges (pointers) in the data structure.

Whenever we append a new letter to an already processed string, it takes amortized constant time to maintain this graph. Below is an example graph for the string aababba. 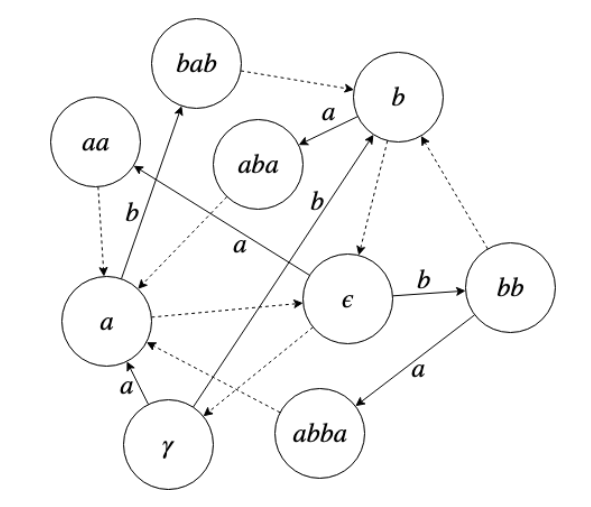 Here \(\epsilon\) denotes the empty string and \(\gamma\) is an imaginary palindrome of length \(-1\). The suffix edges are shown by dashed lines, while the border edges are shown by solid lines with labels. We say that a palindrome consisting of a single letter borders \(\gamma\), which makes the implementation of the algorithm easy.

First, note that this graph will be a tree of nodes where each node will represent a palindrome. So we define a struct Palindrome with the following properties and create a tree of them.

Here, ALPH is the size of the alphabet \(\Sigma\), required to enable adding edges for each possible letter. The value of Tree[u].envelope[i] stores the index v such that Tree[v] represents the palindrome i Tree[u] i; The array Tree[u].renvelope is just the reverse map for envelope. Note that i represents a single letter here and Tree[u] represents the palindrome at index u. Thus, envelope maintains the border edges defined above.

We do not store the complete palindrome, but only a representation, which saves a lot of space. The field len stores the length of the palindrome, and lspIndex stores the index of the longest proper palindromic suffix of this palindrome. Thus, lspIndex provides the suffix edge defined above.

Now the algorithm is straightforward.

To think about the time complexity, note that following a suffix edge always reduces the length of the current longest palindromic suffix. The length cannot be reduced more than \(n\) times, hence, the amortized cost across all updates is \(O(n)\), which makes the average cost of maintenance per update \(O(1)\).